Rutland was established in 1886 and incorporated on June 29, 1908. The original planned site for Rutland was the south shore of Sprague Lake. However, James J. Hill, railroad tycoon, decided on a new route heading straight west to Ellendale rather than to the south. Albert H. Stewart donated the property where Rutland was built. The town was originally named Stewart but, when the residents learned of another North Dakota town by the name of Stewartville, the name was changed to avoid confusion. Several railroad construction crew members had come from the state of Vermont (as had Mr. Stewart) so, in memory of their home, they renamed the town Rutland.

Rutland’s first business was established in November of 1886 when John Prindeville arrived on the first train, unloaded a tent and a carload of whiskey and set up his saloon. His brother, Dennis, joined him and set up a barber shop in the back.

The winter of ’96 was one to remember. Legend has it that John Bloomdale, who lived in a shack near the stockyards, added a section of stovepipe after every blizzard to keep the chimney above the snow banks. And, by spring he had 28 feet of chimney above his little shack. The city was cut off from the outside for nearly three months before the Great Northern Railroad finally broke through the snow and delivered the mail for the first time in 1897.

Schools and churches were among the first effort of cooperation in those days. Church services were held in homes and then later in one-room schools, often no more than 10 x 12 feet in size. In those days, school was generally attended by those 15 to 30 years of age and then only 3 to 5 months in the winter, depending upon the weather.

Rutland has been celebrating something or another since the beginning.

The first time, a dance, was to celebrate the towns first year of existence. The next organized celebration was in 1928 (may have been to celebrate the 40th anniversary of the Great Northern Railroad arrival). The event featured a large carnival and midway and Rutland’s semi-pro baseball team played. In 1948 after 20 years of drought, depression and war, it was time to celebrate again with a parade, calf scramble, baseball and horse show, including trick riding and roping. In 1972 it was time to celebrate the retirement of water bonds that constructed a citywide distribution system. A small event was planned with a carnival on Saturday afternoon and a dance in the evening, but that quickly snowballed into a three day event that included a parade, historical pageant, beard judging contest, rodeo and 24 team softball tournament. The event was christened “90 Years On The Prairie” in honor of the first settlers in 1882. The US Bicentennial in 1976 was the occasion for another celebration. Rutland received a “Bicentennial Community” designation as a result of the community’s efforts during the Bicentennial year. In 1982 Rutland hosted the “Grand Daddy of All Celebrations” when it went into the Guinness Book of World Records with the cooking and eating of the World’s Largest Hamburger. That year, between 8-10,000 people came to sample the tasty 3591 pound burger.

Beginning in 1984, Rutland began its annual Uffda Day on the first Sunday in October. We celebrate our ethnic heritage with a parade, demonstrations, car show, antique tractors, horse drawn farming, crafts, quilt show, and ethnic foods. Join us for the fun next October! 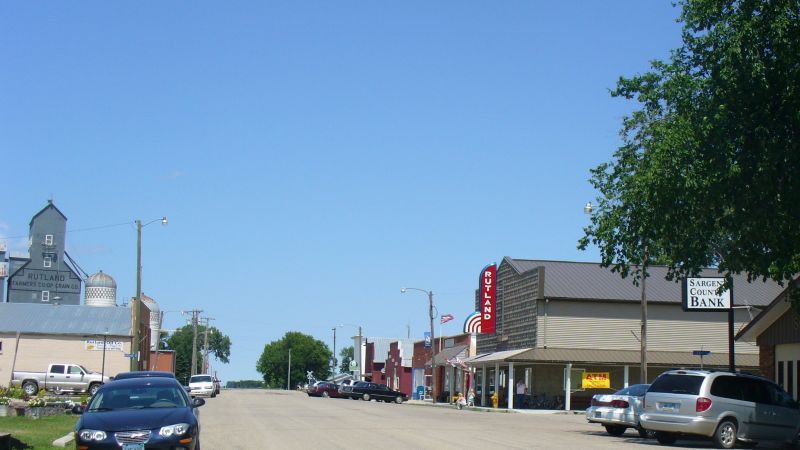 Whether it is a local farmer's market or main street shops, shopping local sustains our community and supports local merchants. A win-win for all!